Everything you need to know about the different types of street sweepers. 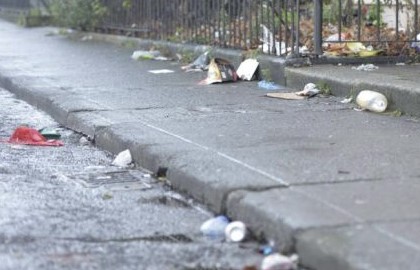 There are several reasons why streets need to be cleaned. Perhaps the most obvious reason is because dirty streets look … dirty. Cities that see a lot of tourists feel an even stronger need to keep their streets visually appealing because nobody wants to visit a filthy city. However, keeping roads clean isn’t solely for appearance reasons. Built-up dirt and debris in streets, gutters, and curbs can pose a serious risk to the general public. Leaves and garbage blocking sewers and storm drains can cause water to pool where it wasn’t intended to and create a flood risk. This standing water can also become a breeding ground for insects, mold, and bacteria. Leaving debris like loose garbage, mud, plant waste, metal, and broken glass can make roadways, crosswalks, and sidewalks slippery and a danger to pedestrians. Before letting the problem get out of hand, consider picking up a street sweeper and create a plan for regular sweeping. Start with the worst areas and get them back to an acceptable level of cleanliness, and then once roads are clean, create a maintenance plan to keep them that way.

That being said, there are several factors that will contribute to the speed and accuracy of operating a street sweeper on a given set of roads. Some of these have to do with road quality or structures, while others involve the actual operation of the chosen street sweeper.

Perhaps one of the most obvious, the conditions of the pavement being swept are one of the key factors that will determine how easy it will be to maintain. Poor roads have a lot of deep cracks where dust and dirt can settle and be hard to reach and pick up. If a road has lots of depressions and doesn’t have a level surface, street sweepers that utilize a vacuum will have a much harder time creating a seal and picking up the smaller particles. Even then, a lot of the debris that is picked up on roads that are crumbling and falling apart will actually from the road itself. Most, if not all, of these issues can be resolved by making sure that roads are maintained, including sealing any cracks and repairing potholes.

Barriers like curbs or median barriers are also know to affect the accumulation of street dirt and the ability of street sweepers to pick up that dirt. Throughout most of the year, around 75% of sediment and the associated pollutants cleaned by street sweepers were found within about 3 feet of a curb. As a result, the focuses of a street sweeping program should focus on roads that have these curbs or barriers. Other streets that are uncurbed can be swept less frequently, or perhaps only in response to heavy winds or rainfall that have moved a lot of vegetative debris or garbage.

When so much of the debris is found closer to the sides of roads, it can be a pain to find parked cars or other obstructions on the roads that need to be swept. While residents or businesses can be asked to move cars, odds are that not everyone will move, and that can be especially frustrating considering that basically all debris ocurrs withing the width of a car. When a single car is parked, it can block access to the curb not only for that width, but also the distance that the street sweeper requires to get around the obstruction. With this in mind, it is usually advised to sweep business and commercial districts at night, and residential districts during the day. That way street sweeping can be done when there are less obstructions to worry about.

Roads aren’t the only way to slow down street sweeping. Inefficiencies in the type of street sweeper as well as the methods chosen while sweeping can both lead to taking a longer time to sweep, having to go over the same area multiple times, or wasting resources when they aren’t needed.

As with most things, the speed at which something is done is very important in making sure that tasks are completed as quickly and as correctly as possible. The easiest way to think about it is with mowing grass. Sure, driving fast might seem like the area will be done sooner, but when a second pass is needed because the grass wasn’t cut as low as it should be, now valuable time and gas is wasted when it could have been done right the first time. Similarly, when street sweeping, it is important to not go too fast, because then some debris will be missed, but operators need to make sure that they are covering an appropriate distance during a shift. Keeping this in mind, the optimal average speed is around 5 miles per hour. This speed provides the best balance between pickup performance effectiveness and the need to sweep a reasonable distance of streets on a given day.

Fugitive dust losses are an important thing with sweeping programs that positively affect the air quality and ones that don’t. This specifically is something that will vary with the type of street sweeper that is being used. In some instances, the use of water to limit the amount of fugitive dust is actually quite common. However, this has been shown to reduce the amount of debris that is picked up, especially the smaller the particles are, and these notmally have a lot of the pollutants.

There are currently three different types of street sweepers: mechanical sweepers, vacuum sweepers, and regenerative air sweepers. Each of these sweepers have their own pros and cons and the best type for a specific application might be different than that for another based on things like the size of the debris, amount of debris, and environmental concerns. These all could influence the best machine for various sweeping environments.

Mechanical street sweepers have been around the longest compared to the other types of street sweepers. Because of this, they are the most common machines in use today. These machines operate with brooms that push debris towards the middle of the sweeper, then there is some sort of conveyor system that then picks up what was swept and tosses it into a hopper until it can later be dumped. They are usually equipped with brooms called gutter brooms that are primarily used to transfer debris from the gutter line into the path of the sweeper. These sweepers are also usually equipped with small water sprayers to try and control fugitive dust losses, they still have quite a difficult time cuntrolling dust in dry weather. When using water, it tends to turn dust into a mud-like substance that is hard to pick up.

These street sweepers operate similarly to a large household vacuum. Typically, there is a single suction outlet on one of the sides of the sweeping head, and the air is continuously exhausted out the back of the machine. They normally utilize windrow and gutter brooms to push debris towards the vacuum opening in the head. Vacuum sweepers were designed with information that most debris lands within three feet of the side of the road, so the vacuum is positioned to clean this width primarily. Even though vacuum type sweepers typically use water-based dust suppression systems, traditional vacuum sweepers exhaust a high level of particulates into the atmosphere on a continual basis. While they seem to do a generally better job than brush sweepers in removing and retaining these small particles, the level of the emissions of fine particles can still be significant if fugitive dust losses are not controlled.

The next steps are to look at the benefits of each of the various types of street sweeper and to decide what is best for your specific application. Do you have a lot of large debris on your roads that a sweeper that uses a vacuum might not be able to pick up? Then the best choice for you might be a mechanical street sweeeper. Is the environment your number one priority and nothing else matters? Then a regenerative air sweeper might be your best bet. If you don’t know what you need, then get in touch with us. We’ve got several experts here that would be able to help you get the right street sweeper for the job. Let’s start the conversation! The Schwarze M6 Avalanche is a rugged, full-feature chassis-mounted mechanical street sweeper ready to take on the toughest sweeping tasks. This is a no-nonsense workhorse that will not disappoint. Excellent choice for any sweeping operation.

Learn More About the M6 Avalanche ▶ 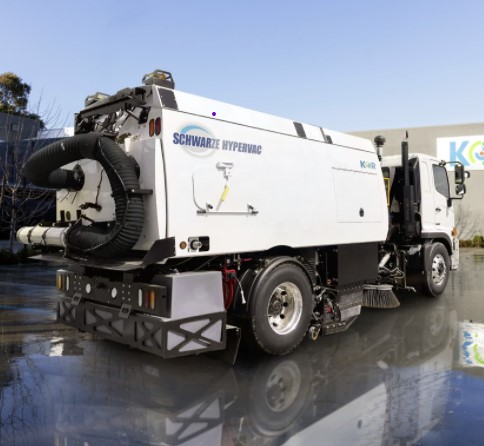 The Schwarze HyperVac takes full vacuum street sweeping to a whole new level with its exclusive Surface Scrubbing Technology. At a mere 10′ height, it operates below the tree canopy, yet exceeds the capacities of all others in its class.

Learn More About the HyperVAC ▶ 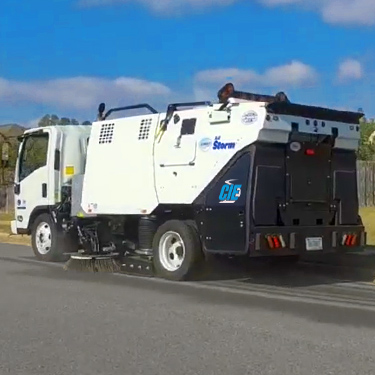 The Schwarze A4 Storm is a compact, non-CDL chassis mounted sweeper that is ideal for smaller towns, university campuses and large industrial complexes. Its Isuzu chassis offers unmatched maneuverability, operator visibility and comfort.

Learn More About the A4 ▶